A People’s Budget – Fighting Back on Tax Day 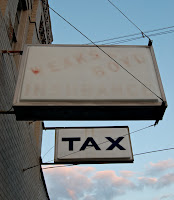 It is tax day. A day when we should be proud to contribute to our country; to pave our roads, to fund our social services, and to pay our teachers, police officers, firefighters and civil servants. But “proud” is not the word I would use. Just look at where our money is going. Now embroiled in a third war overseas, our congressmen have decided to increase the already-inflated defense budget over the next year. All told, over $1 Trillion will be spent on the U.S. military over the next year, while funds are cut from social services and education. With less federal support, state budgets are in the red. Local governments blame the unions and—like in Wisconsin—are peddling legislation to weaken our rights. Thousands of teachers will be laid off.

As we point out in our new documentary, Crossing the American Crises: From Collapse to Action, the nation’s priorities are skewed. Inequality continues to rise. Homes are boarded up while homeless sleep on the streets. The sick are still turned away because of a lack of health care. The banks are bailed out, while the people are left to suffer. Hard-working Americans pay the bulk in taxes, while multi-millionaires hide their assets abroad. Corporations are subsidized or encouraged to move their production overseas. We are gutting the American dream—if there ever was one.

But there are answers. As The Nation pointed out last week, the Congressional Progressive Caucus has drafted a "People's Budget," which members, Representative Michael M. Honda (D-CA) and Representative Raul M. Grijalva (D-AZ) say, “eliminates the deficit, stabilizes the debt, puts Americans back to work, and restores our economic competiveness.”

According to their calculations, with the “People’s Budget,” we could be running a surplus of over $30 billion by 2021. How? By implementing a fair tax code, rebuilding the economy and bringing the troops home.

Not bad, but it’s still missing a key component: Participation.

"So far, the White House and the Congress have completely sidelined the public in the budget processes," writes Jeffrey Sachs in the Huffington Post.

Daniel Altschuler and Josh Lerner, believe they have the answer. In their recent Christian Science Monitor article, “Government can't solve budget battles? Let citizens do it,” Altschuler and Lerner argue that we should “Look south!”

“’Participatory budgeting’ (PB), a model popular throughout Latin America, may offer a way to do more with less, and to reconnect citizens with government,” they write.

As we show in our film, Beyond Elections, the Brazilian Workers’ Party first implemented participatory budgeting in the city of Porto Alegre two decades ago, under a wave of democracy that engulfed the country following the fall of Brazil’s brutal two-decade-long dictatorship in 1985. Since it began in 1989, thousands of city residents have directly participated in the allocation of millions of dollars of city funds. The process has been replicated across the globe, and the World Bank now promotes participatory budgeting for “developing” nations.

Alschuler and Lerner (co-director of the Participatory Budgeting Project) are now on tour across the country promoting the process in the United States. In 2009, Chicago’s 49th Ward became the first district in the country to implement PB. Citizens participated in deciding how to distribute $1.3 million of annual discretionary funds. Seven new candidates, who won office in Chicago’s February elections, have also pledged to implement PB. “Elected officials and community leaders elsewhere – from New York City to San Francisco and from Greensboro, N.C. to Springfield, Mass. – are considering launching similar initiatives,” write Lerner and Altschuler write.

This is an important moment. As journalist Mark Engler points out, Tax Day 2010 “was probably the apex of the Tea Party movement.” Now, the tides have changed. From Wisconsin to California, New York to Detroit, people are fighting back: demonstrating, marching, occupying, resisting and organizing (even around PB). We are fighting to defend our basic rights.

Perhaps, as we contribute to this year’s budget, we’ll remember the bitter irony of the country’s twisted priorities, but also the proud truth that it is our responsibility to demand our rights.

“And those who tell us that we can't,” said president-elect Barack Obama on election night 2008, “we will respond with that timeless creed that sums up the spirit of a people: Yes We Can.”

Michael Fox is the Associate Editor of NACLA. He is co-director of the documentary films Beyond Elections: Redefining Democracy in the Americas and Crossing the American Crises: From Collapse to Action, both available through PM Press. More of his work can be found at blendingthelines.com.

Thanks for this helpful post,Very helpful. :)
check the Tax preparer if you want

Thanks for your interesting sharing, this knowledge will help me a lot dowel jig reviews. Great.

Beyond Elections In the News

In The Name of Democracy - En el Nombre de Democracia